Some time ago I felt that my dual quad-core AMD Opteron NAS server was a greedy piece of shit just sucking up power and giving nothing in return..other than all the files I need to keep on it.  Selfish POS.  My typical solution to a problem is to throw money at it so that’s what I did.  I turned to eBay and picked up two six-core 2419EE processors, or so I thought.  THIS MONGOLOID SENT ME THE REGULAR 2419 AND NOT THE ENERGY EFFICIENT PROCESSORS!  Of course I only realized it after over a year of using that same power hungry server because again, of course, I’m also very proficient at procrastination.  My conscience and need to single-handedly save the planet started bothering me so YET AGAIN I turned to eBay.  I picked up a pair of AMD Opteron 2425HE CPUs and while not as power sipping as the 2419’s I originally shot for they do pack more horsepower.  The environment can take a small L on this one.  So today I finally decided to do the processor swap and thought I’d bring you all with me since I’m in dire need of attention.  Buckle up….

First start by properly shutting down the server.  Or you could get super eager and forget completely then just pull the power cable out of the back, both good options. 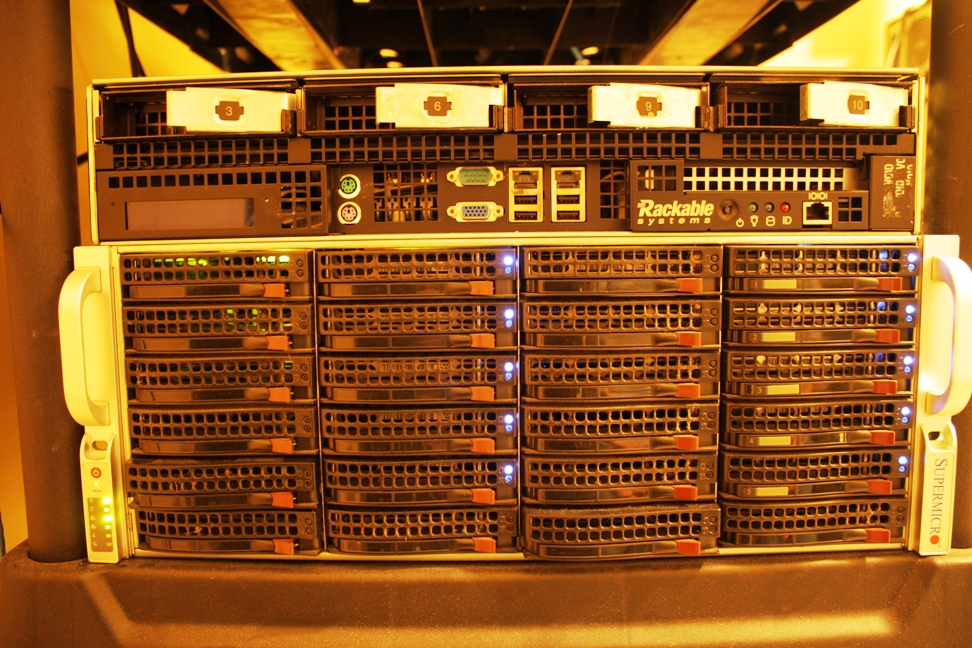 Next, prepare your workspace…ugh, gotta make some room. GTFO 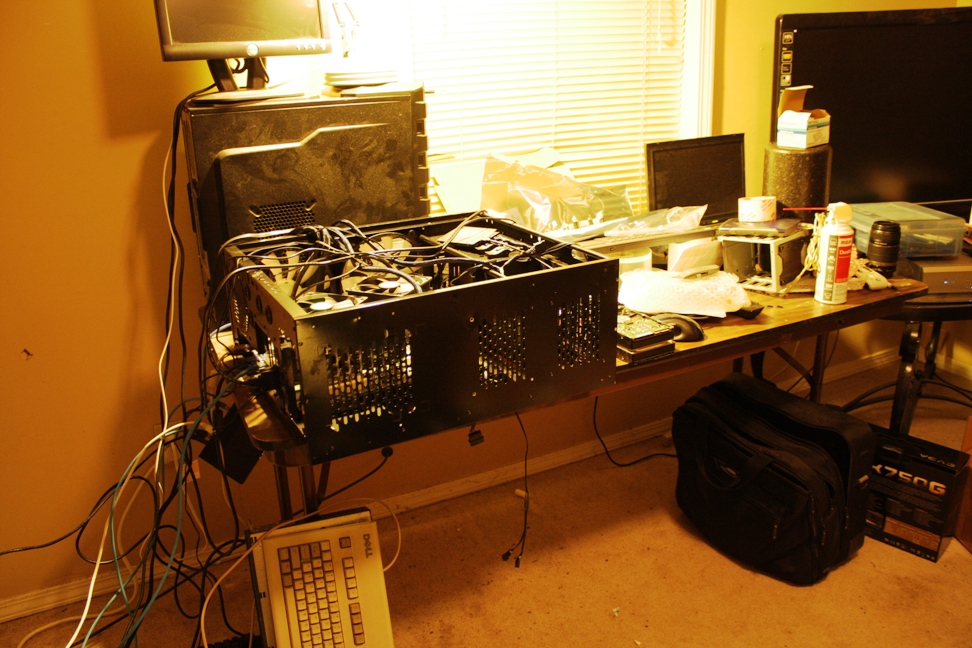 Much better.  As you can see I ghettorigged just about the whole damn thing.  Ripped out the dual 900W power supplies and the 80mm Delta JATO fans because I like my hearing.  Put in a 600W desktop power supply and made a fan wall out of 140mm NZXT case fans and used every bit of my cunning to ziptie them together and wedge them in place.  #StayClassy 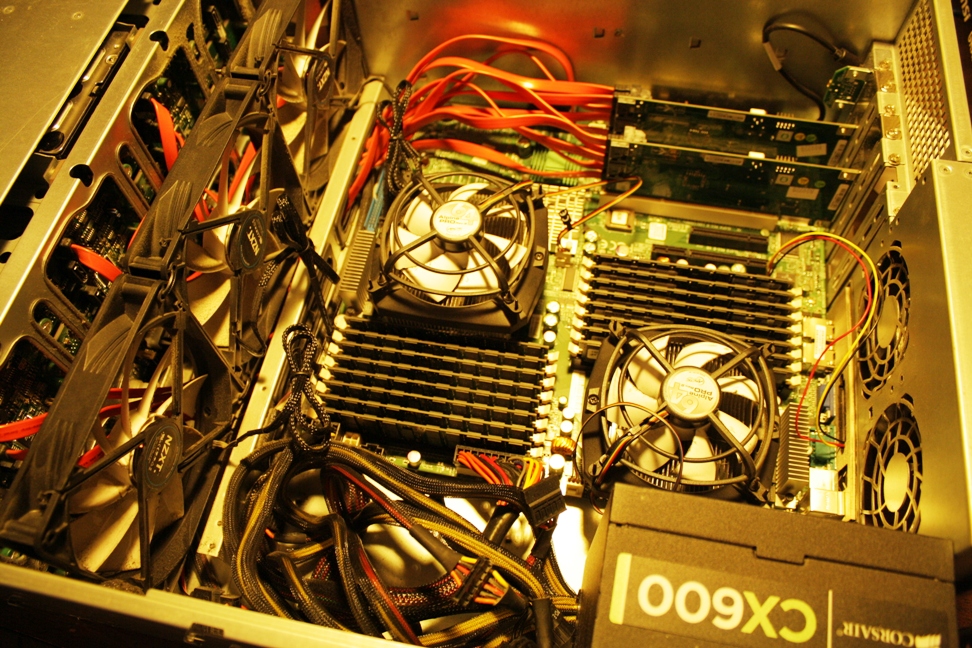 Step 173 – Berate the system viciously until the processor heatsink fans come off in a pathetic yet admirable attempt to escape and regain whatever semblance of self respect they thought they had.  Or you could use a screw driver, I guess.  If you’re going to be a baby about it. 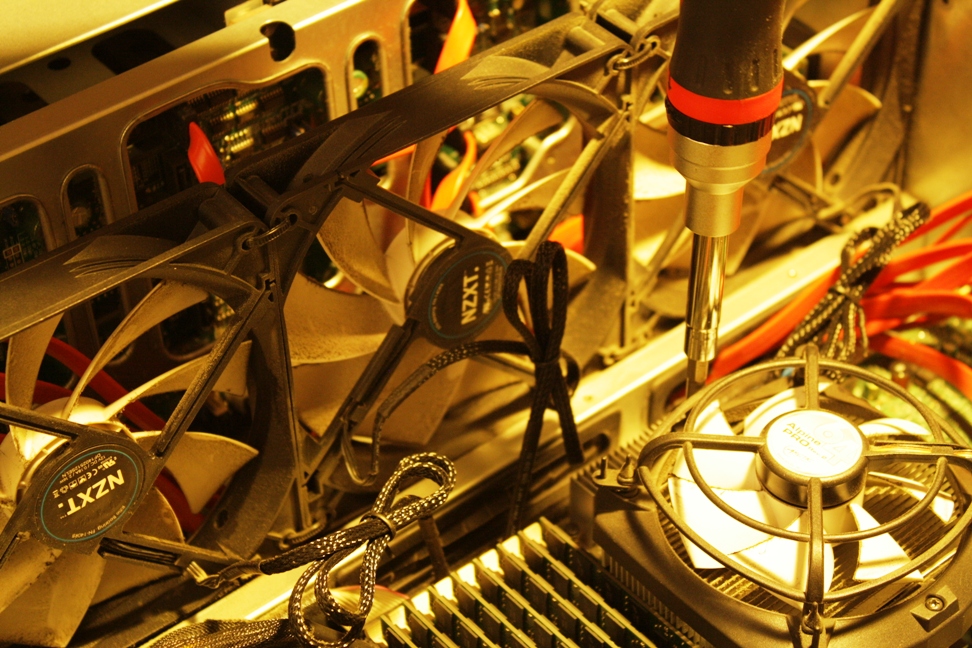 NOW LIFT !! PUT YOUR BACK INTO IT 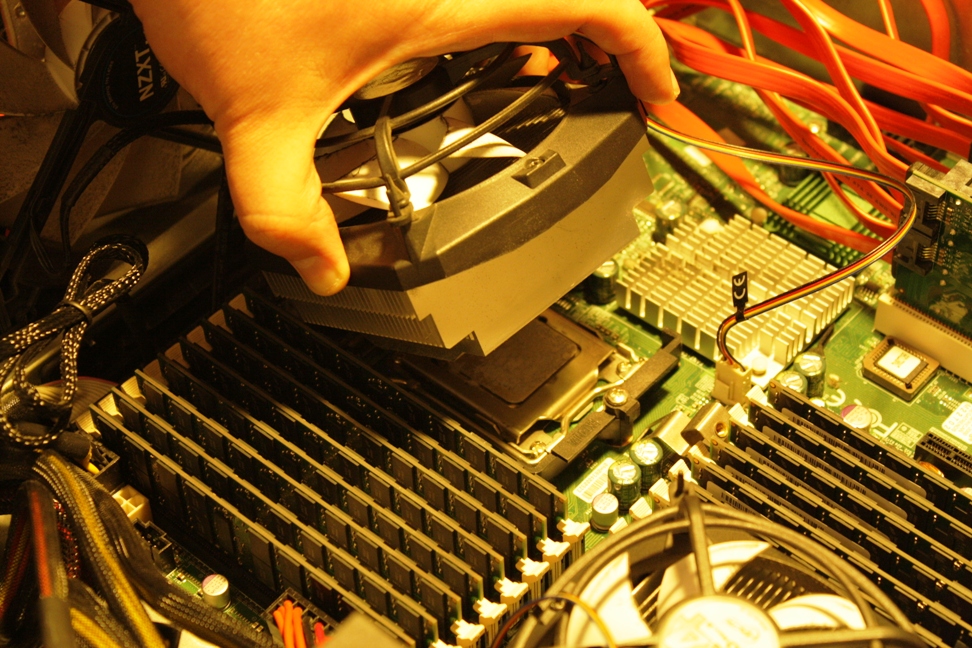 Clean off the caked (mmm, cake) residue that you’ve no doubt neglected for the entire life of the system.  I use a pen cap which is no surprise to any of you who know me, then clean the excess with an alcohol wipe. 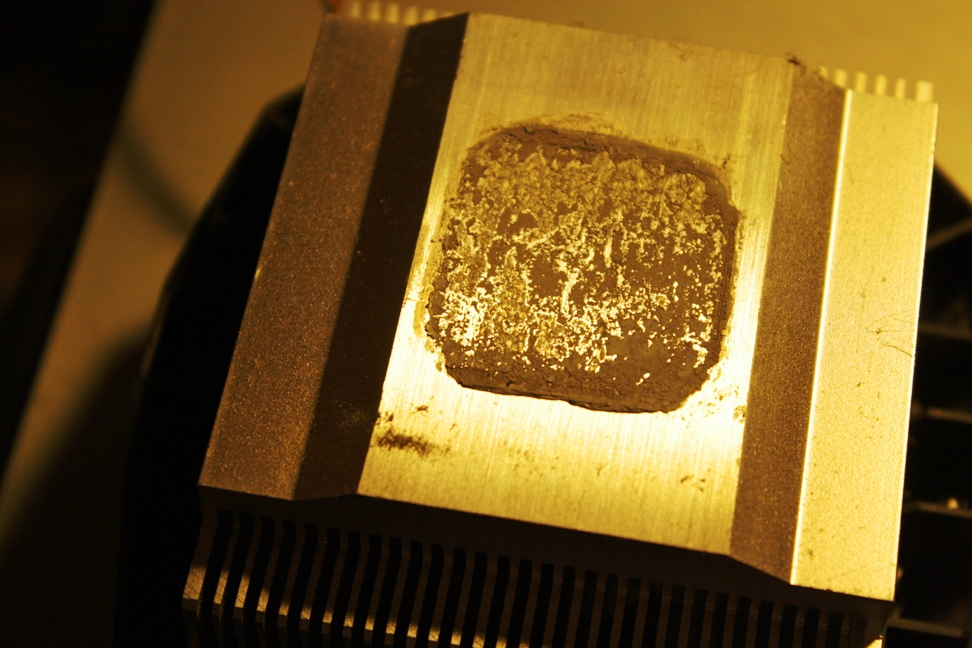 Remove the old CPU by pressing down on the securing lever, relieving pressure holding the chip in place.  Then lift the top cover off leaving the old processor ready and willing (if you know what I mean) to be removed from its shackles. 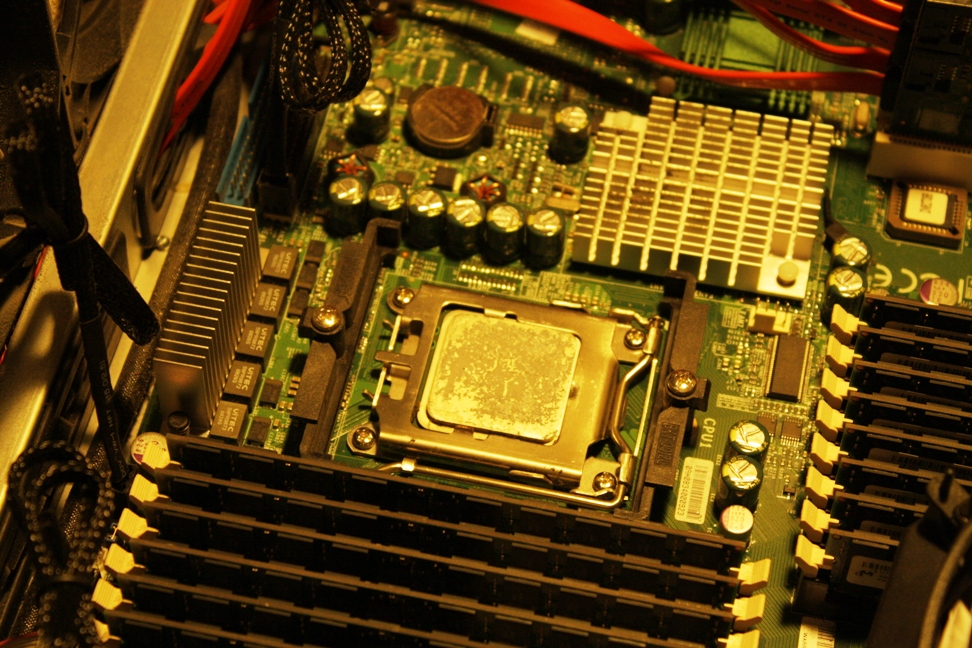 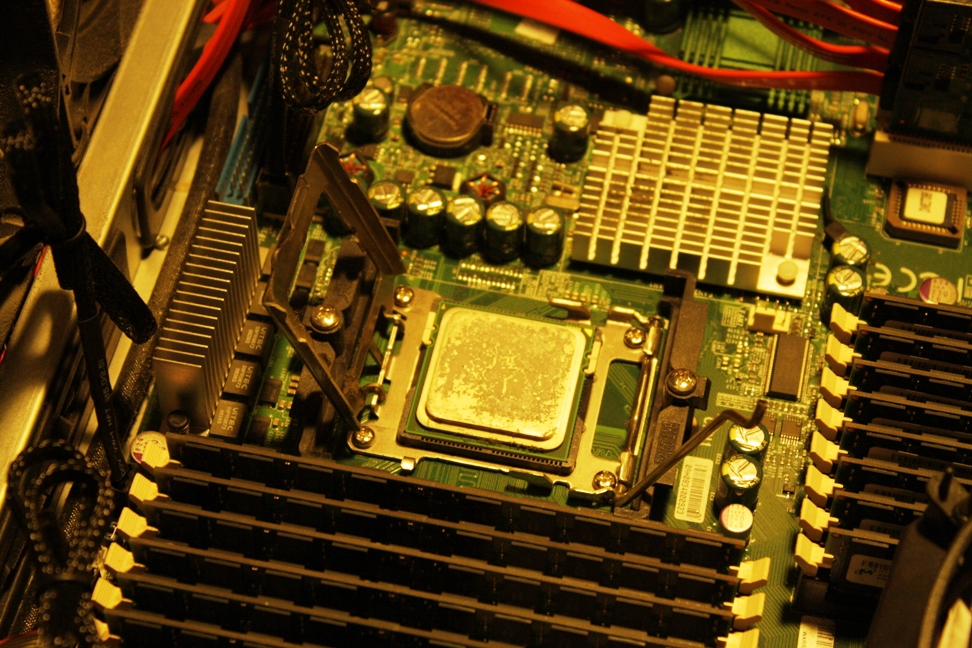 Now it’s time to put in that new new.  Why do these things have QR codes?  Who’s going around scanning that shit.  Fraud, waste, and abuse.  No wonder AMD is in the tank.  JKJK, AMD, I fucks wit ya. 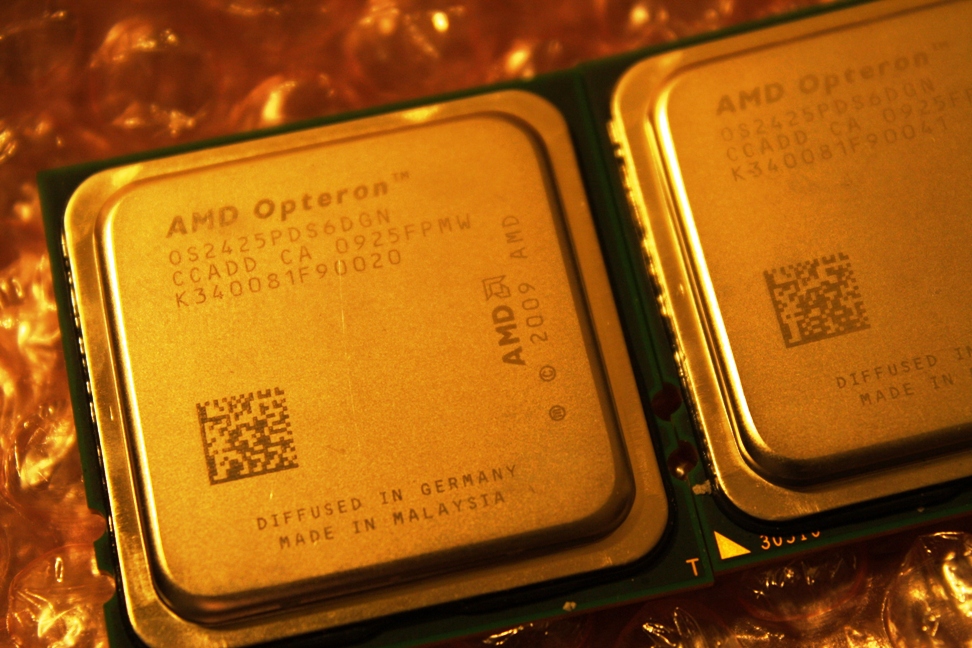 Step 18b (who’s counting anyways,) put in the new CPU in the same orientation as you removed the old one.  The ole in out in out, or hokey pokey if you’re slightly less perverted.  Apply a small amount of thermal paste (Arctic MX-4 is what I had laying around.)  Don’t be an overachiever here, just a fucking dab. 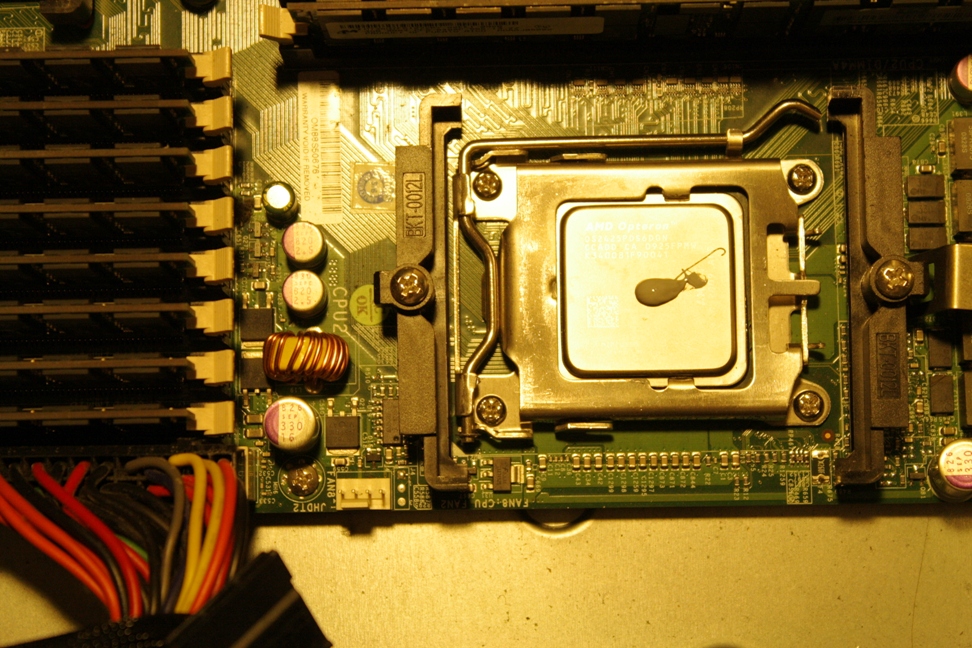 I got eager again and put the heatsink fan back on without cleaning it so here’s the spread (dat spread) pattern in case you’re curious.  As a side note please take this time to clean your damn fan blades.  Dirty blades don’t move as much air. 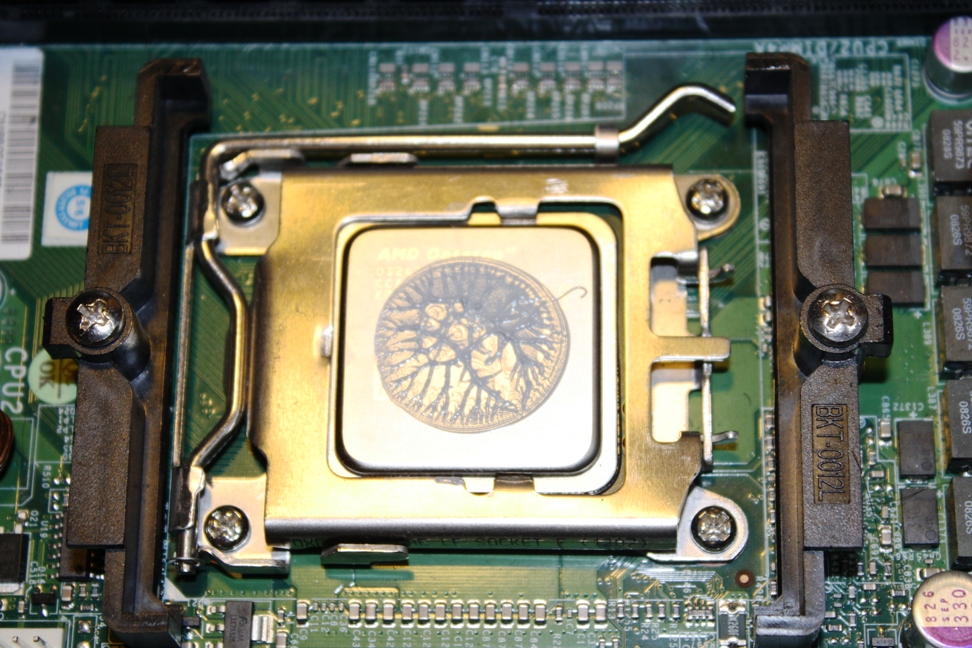 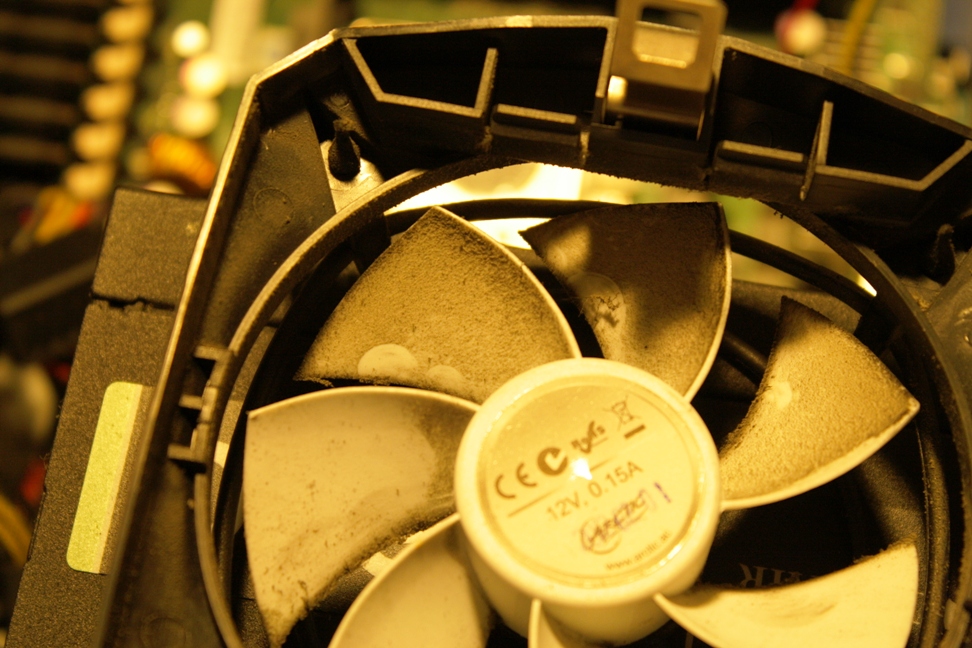 I’m not going to show you how to put the heatsink fan back on because you can just scroll back up the page and follow the instructions in reverse.  I’m not your babysitter.  REMEMBER THE GOLDEN RULE.  Don’t close your case until you know it turns on after you messed with it.  It’s not a superstition.  Haphazardly closing the case before testing changes has literally killed billions of people in the last decade. 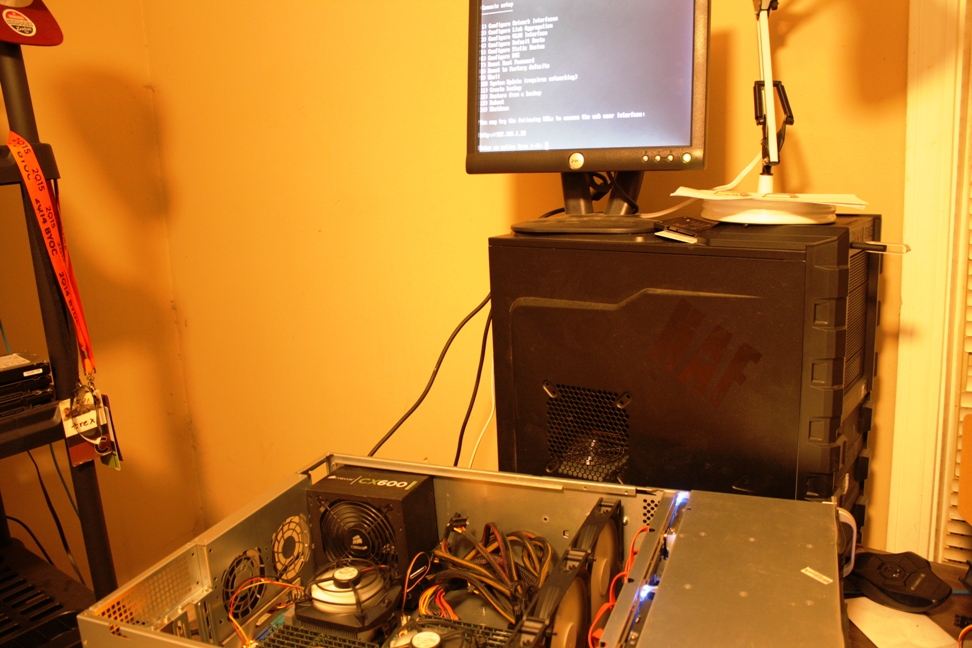 After securing the fair maiden back in her chamber I took a moment to reflect just how much this has changed me as a person.  To be honest not much.  What did change was the power consumption, though, and that was the whole reason for doing this.  LET’S CHECK IT OUT.

Well this is hard to read; photographer definitely getting a microphone thrown at his head.  276-ish Watts chillin at idle before the CPU change.

212 Watts at idle after the change.  Fuck me, I’m saving the god damned world.  Forget about Leo, give me a damn trophy. 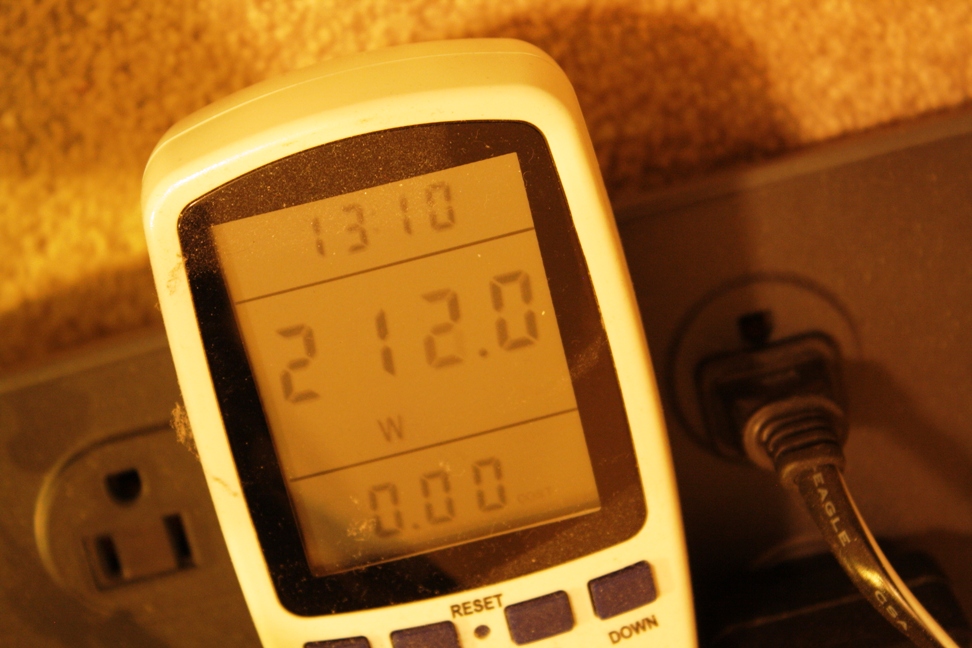 Could I get even lower power processors?  Sure.  Is a dual six-core overkill for a file server?  Sure.  But much like my love for pens, my love for computers can be described in one word; excessive.  Plus I don’t pay the power bill so LOLOLOLOL.

Bladow or however you spell it. 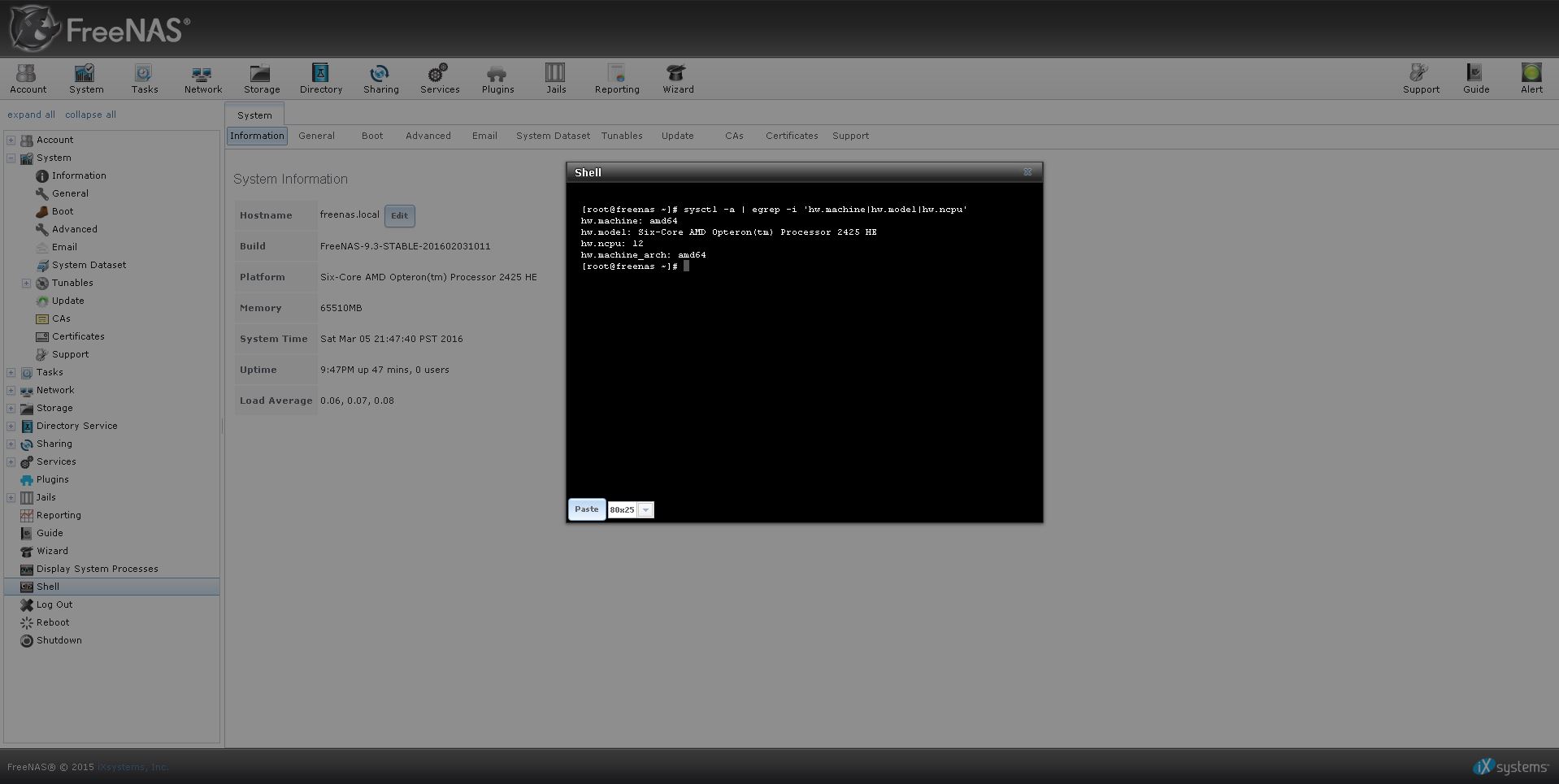 One thought on “Upgrayedd..two d’s for that double dose of pimpin’” 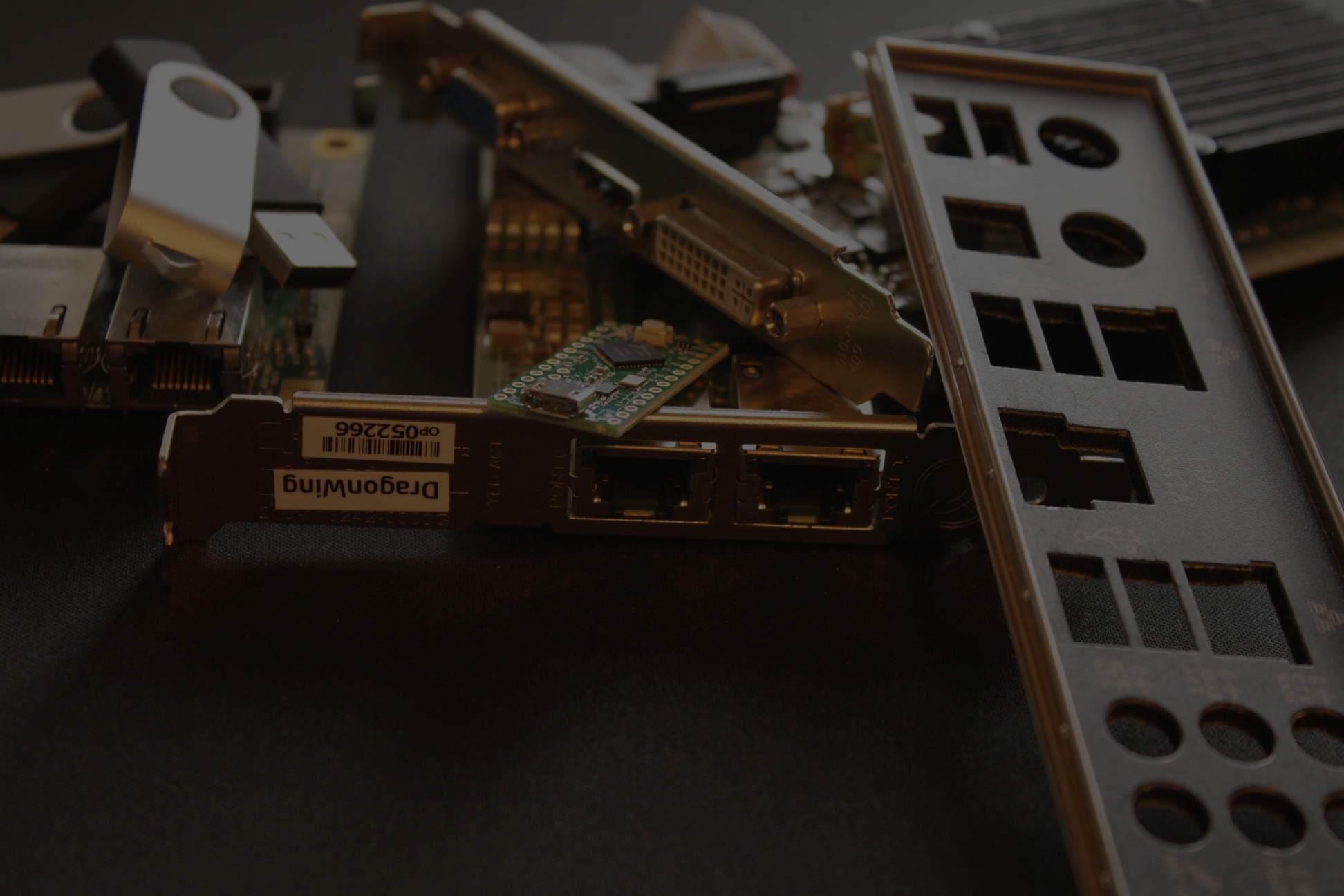